Collaboration patterns of the active developers in GitHub 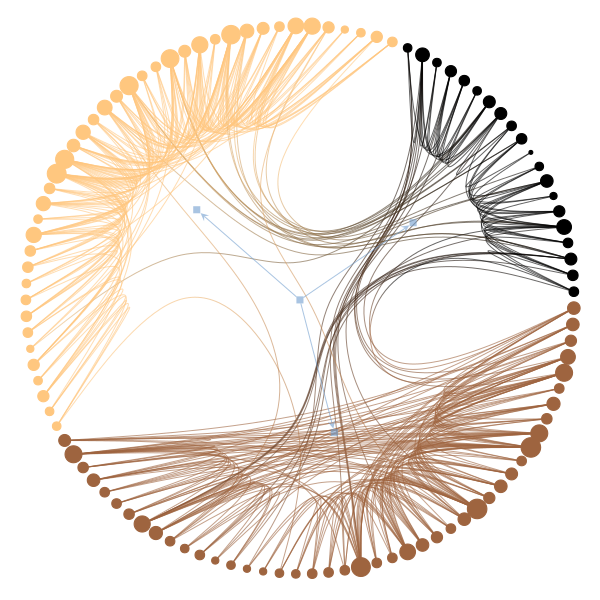 A traditional tool for analyzing collaborative environments is co-authorship networks: a graph in which each node represents an author and each edge represents a collaboration between the two authors. This tool has been used extensively in studying scientific collaboration patterns and has been applied to many other collaborative environments. However, previous work on Wikipedia [2], an online environment that shares much of the above challenges with GitHub, found that the traditional co-authorship networks face challenges in scaling to the size and nature of Wikipedia. In Wikipedia, the fact that two authors contribute to the same page is not sufficient to establish a collaborative relationship. Long time gaps between the contributions, very small contributions, and contributions that are being cut-out shortly after should not be used to establish a collaboration between authors.

In our work, we performed a comprehensive study of the collaboration patterns in GitHub that attempts to address the described challenges. We carefully employ participation criteria for repositories (to eliminate personal and inactive repositories) and developers (to eliminate minor contributors), and use temporal co-authorship networks to account for temporal changes in patterns.

However, mining GitHub poses several challenges that can negatively affect the analysis of collaboration patterns [1] (see also this related post):

These issues have also been taken into account when performing the analysis.

We collected data for repositories in a set of 17 different programming languages that represent diverse characteristics (e.g., imperative/functional, systems/web/scientific, established/recent) and covers the top 10 languages based on IEEE spectrum ranking 2016.

GitHub API v3 was used to collect the data. We took advantage of the developer statistics API that provides a weekly summary of commits for each developer. As this API only provides information for the top 100 developers, we had to mine this information from the commit log of repositories that have more than 100 developers.

A key part of our analysis is the selection of active developers. The purpose of the activity threshold is to get rid of the long tail phenomenon that is often associated with activities in large social networks. In GitHub, we find a long tail of developers that make very few and minor code commits. We, therefore, propose participation criteria (relative to the commit volume in each repository) that successfully filter out approximately 70% of the developers, while still retaining approximately 90% of the code commits, validating the existence of significant long tail behavior.

To account for temporal changes in collaboration patterns, and to analyze the evolution of patterns over time, we break the collected data into 10 nine-month periods with six-month overlap. We think nine-month is a reasonable period to observe collaboration patterns, and the overlapping time windows with a three-month shift to allow a smoother analysis of the changes observed after each quarter.

Analysis method to detect the patterns

We use the following metrics, often used in social network analysis, to analyze the constructed temporal networks:

Our paper includes a detailed analysis of the constructed temporal networks. The main findings are as follows:

In addition to these findings, the methodology we develop can be used to better understand developer productivity and collaboration in collaborative coding environments.

For more information, including the detailed results, please refer to our published paper:

[2] Laniado, David, and Riccardo Tasso. “Co-authorship 2.0: Patterns of collaboration in Wikipedia.” Proceedings of the 22nd ACM conference on Hypertext and hypermedia. ACM, 2011.

I am a PhD student in the Toronto Intelligent Decision Engineering Laboratory at the University of Toronto. My research interests include machine and deep learning, heuristic search and optimization, and scalable data mining.