We (Valerio, Jordi and myself) have continued our meta-analysis of research papers on how software development practices are influenced by the use of a distributed social coding platform like GitHub (see our initial work in this area).

Our objective is to identify the quantity, topic and empirical methods used in these works to see what we have learned as a software community thanks to the large number of papers mining GitHub with the hope of extracting some useful information that can help improve software development.

To do this, we performed a systematic mapping study, which was conducted with four research questions and assessed 80 publications from 2009 to 2016.

Our study attested the high activity of research work around the field of Open Source collaboration, especially in the software domain, revealed a set of shortcomings and proposed some actions to mitigate them. We hope this work can also create the basis for additional studies on other collaborative activities (like book writing for instance) that are also moving to GitHub.

We provide a summary of our findings in this post. Full results have been published in the IEEE Access journal. Read them here (free for all, it’s an open access journal).

What topics/areas have been studied? What have we learned thanks to GitHub data?

The following table lists the main topics and areas that papers mining GitHub data focused on. We list a sample of the main findings reported by those papers. As you’ll see some of the findings are expected but others are more surprising. Let me emphasize again that these are NOT our findings but the findings of a large community of researchers working on this topic. Refer to the paper to go to the sources of each claim and get all the data you need to understand the context of the claim. 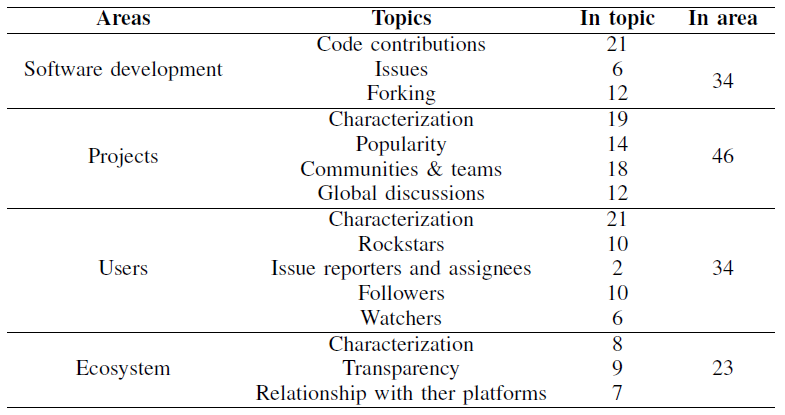 How were these GitHub mining studies conducted?

We characterized the methodological aspects of the empirical process followed by the selected papers when inferring their results and take a critical look at them to evaluate how confident we can be about those results and how generalizable they might be.

What empirical methods have been used to reach the previous statements?

Regarding the details of the empirical methods used in the papers, we classified the selected papers according to:

The following figures summarize the results. 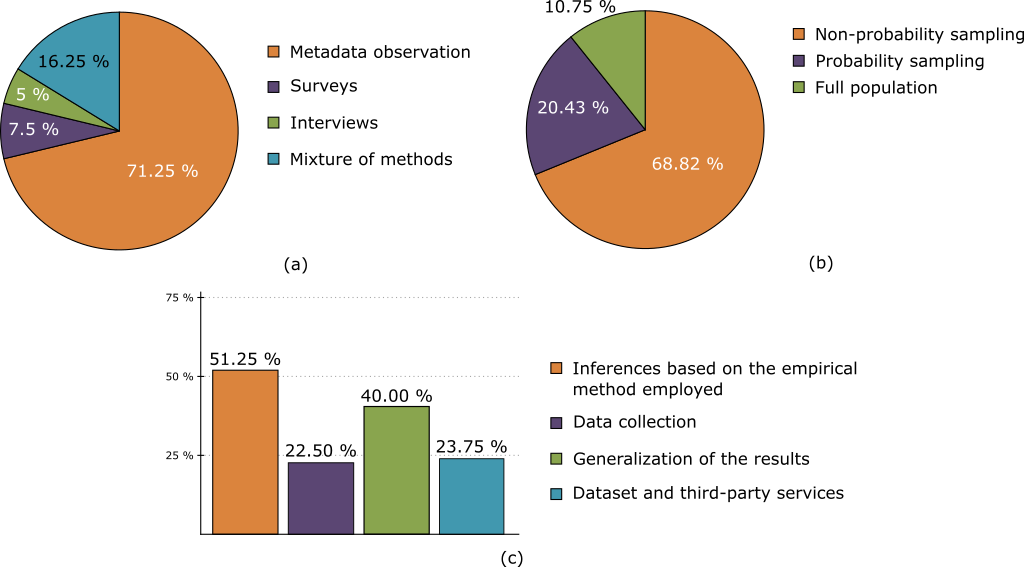 Which technologies have been used to extract and build datasets from GitHub?

Papers studying GitHub must first collect the data they need to analyze, which can either be created from scratch or by reusing existing datasets. We classified the selected papers according to:

The following figures summarize the results. 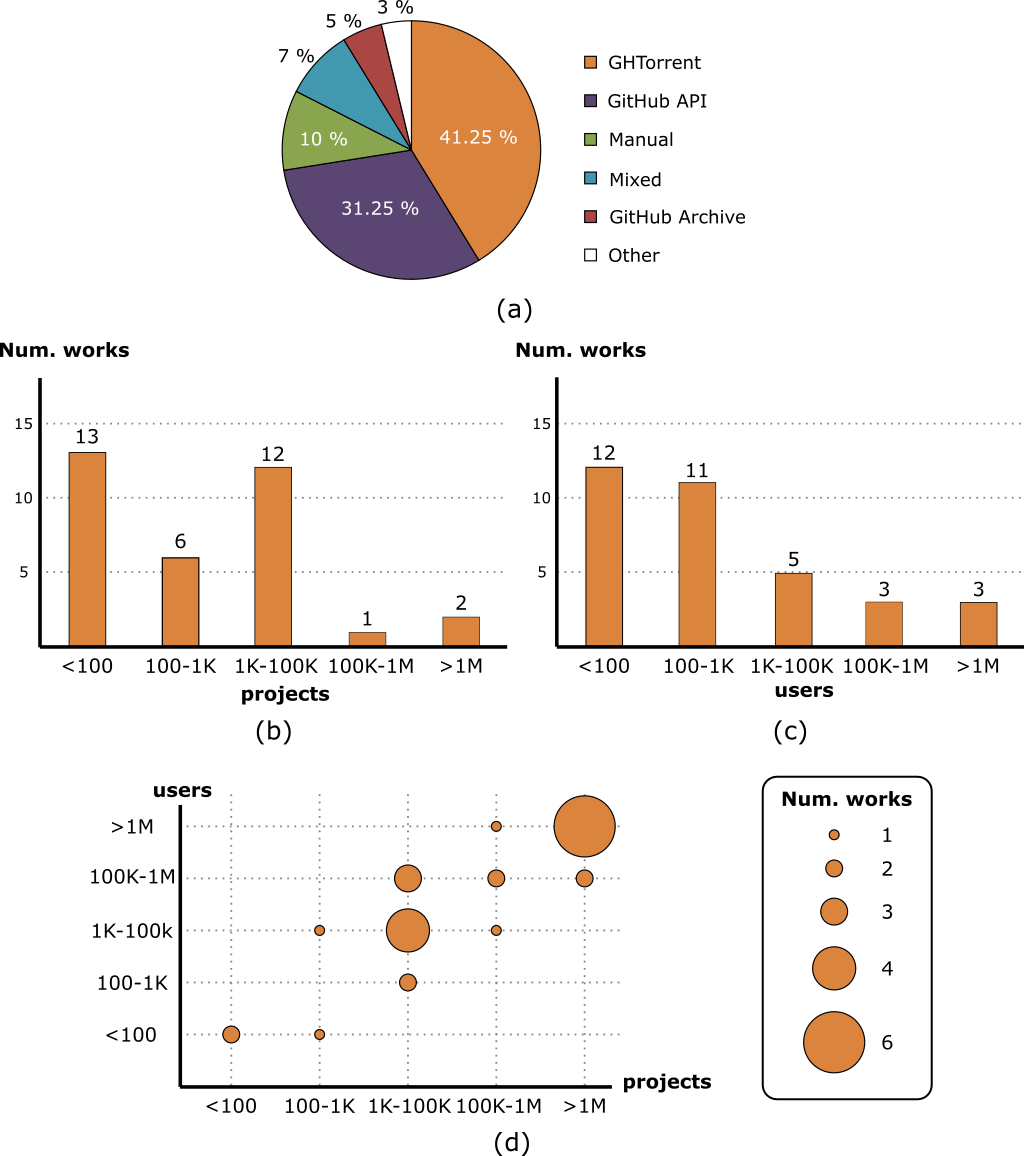 What are the research communities and the publication fora used?

We believe it is also interesting as part of a systematic mapping study to characterize the research community behind the field, both in terms of the people and the venues where the works are being published. According to this, we analyzed the two following dimensions: 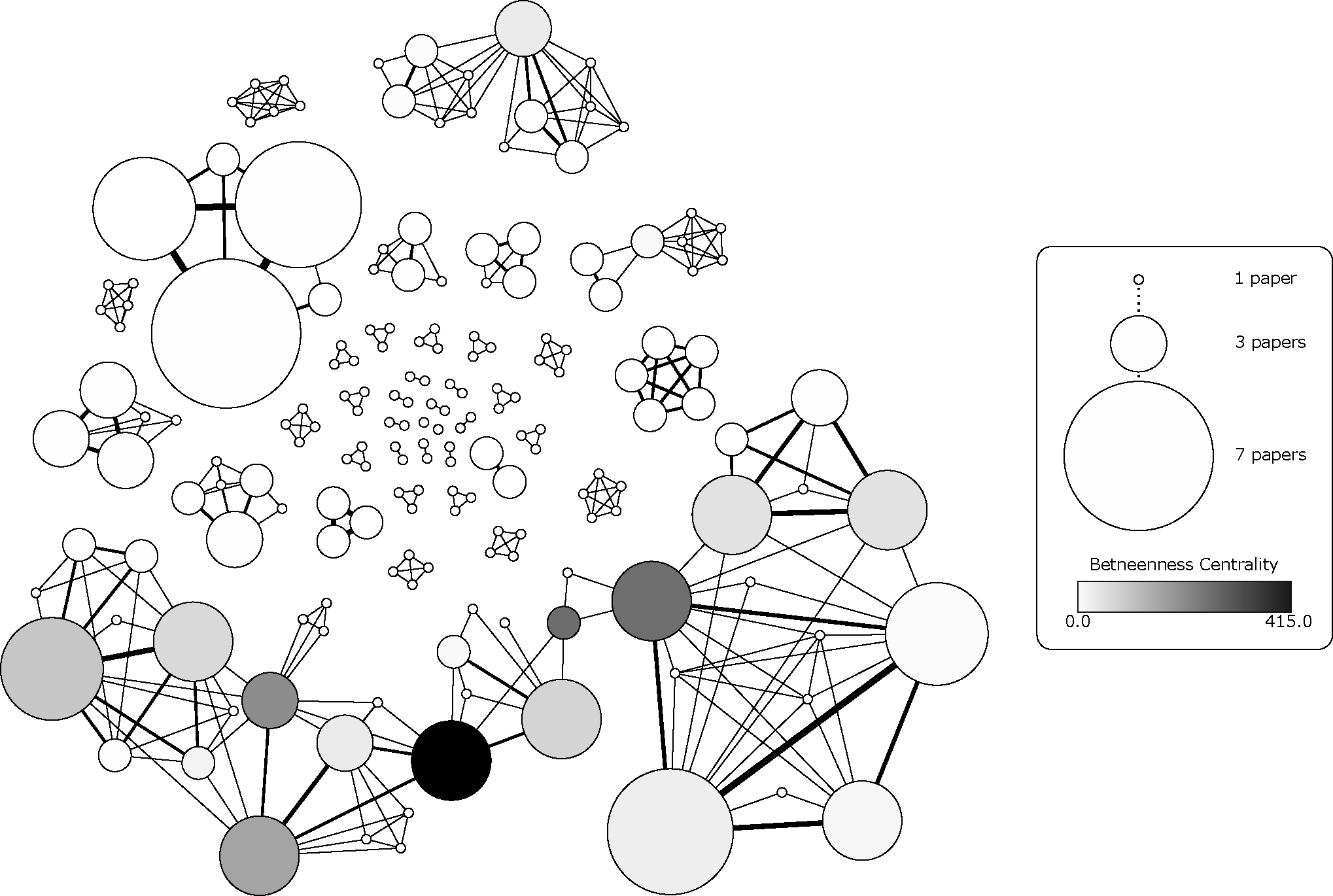 It’s undeniable the amazing opportunity that GitHub (or more specifically the millions of projects hosted there and all the available data that comes with them) offers to the software research community. Many useful findings have already been reported that I believe can make a significant impact on the way open source projects are managed (hopefully, making them more community-aware 🙂 ).

Still, we have also seen some issues regarding how some of these previous studies have done that could hinder the generalization of the results. I think it’s only fair to finish our metastudy with a list of concerns that we would like to see addressed in the future.

Lack of specific development areas and interdisciplinary studies. Our analysis of areas/topics reveals a lack of works studying GitHub with a more interdisciplinary perspective, e.g., from a political point of view (e.g., study of governance models in OSS), complex systems (e.g., network analysis) or social sciences (e.g., quality of discussions in issue trackers). We also miss works targeting early phases of the development cycle (e.g.s studying requirements and design aspects). Obviously, these kinds of studies are more challenging since there is typically fewer data available in GitHub or needs more processing.

Overuse of quantitative analysis. Right now, a vast majority of studies rely only on the analysis of GitHub metadata. We hope to see in the future a better combination of such studies (typically large regarding the spectrum of analyzed projects but shallow in the analysis of each individual project) with other studies targeting the same research question but performing a deeper analysis (e.g., including also interviews to understand the reasons behind those results) for a smaller subset of projects. We detected some evidences of this shift in the number of works applying longitudinal studies, where we found a positive trend, thus improving the situation detected in OSS by other works.

Poor sampling techniques. We believe that the GitHub research community could benefit from a set of benchmarks (with predefined sets of GitHub projects chosen and grouped according to different characteristics) and/or from having trustworthy algorithms responsible for generating diverse and representative samples according to a provided set of criteria to study. These samples could, in turn, be stored and made available for further replicability studies.

Small datasets size. Most papers use datasets of small-medium size, which are an important threat to the validity of results when trying to generalize them. Also, more than half of the analyzed paper did not provide a link to the dataset they used nor an automatic process to regenerate it, which may also hamper the replicability of the studies. However, it is important to note that the number of works sharing their datasets is increasing over time.

Low level of self-awareness. We believe the limited acknowledgment of their threats to validity (around 34% do not report any) puts the reader in the very difficult situation of having to decide by herself the confidence in the reported results the work deserves. Works reporting partial results or findings on very concrete datasets are perfectly fine but only as long as this is clearly stated. However, we detected an upward trend in reporting threats to validity in recent years.

Need of replication and comparative studies. Clearly urgent since almost none exist at the moment. replicability is hampered by some of issues above and the difficulties of performing (and publishing) replicability studies in software engineering. Comparative studies need to first set on a fixed terminology. Some papers may seem inconsistent when reporting on a given metric but a closer look may reveal that the discrepancy is due to their different interpretation. For instance, this is common when talking about success, popularity or activity in a project (e.g., one may consider a project successful as equivalent to popular, and by popular mean to be starred a lot, while the other may interpret successful as a project with a high commit frequency). Replicability
is also threaten in studies involving user interviews, as the material produced as a result of such interviews is normally not provided.

API restrictions limits the data collection process. GitHub self-imposed limitations on the use of its API hinders the data collection process required to perform wide studies. A workaround can be the use of OAuth access tokens from different users to collect the information needed. An OAuth access token is a form to interact with the API via automated scripts. It can be generated by a user to allow someone else to make requests on his behalf without revealing his password. Still, researchers may need a large number of tokens for some studies. To deal with this issue, we propose that GitHub either lifts the API request limit for research projects (pre-approving them first if needed) or offers an easy way for individual users to donate their tokens to research works they want to support.

Privacy concerns. Data collection can also bring up privacy issues. Through our study, we discovered that GitHub and third-party services, built on top of it, are sometimes used to contact users (using the email they provide in their GitHub profile) to find potential participants for surveys and interviews. This potential misuse of user email addresses can raise discontent and complaints from the GitHub users. Even when it is not clear whether such complaints are reasonable, the controversy alone may hamper further research works and therefore must be dealt with care. As with the tokens before, we would encourage GitHub to also have an option in the user profile page to let users say whether they allow their public data to be mined as part of research works and under what conditions.