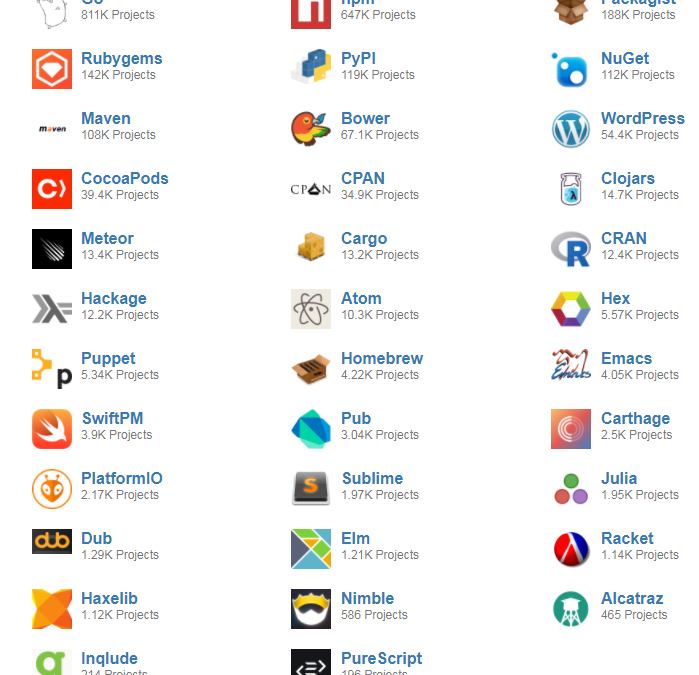 Libraries.io monitors over 2 million open source libraries/packages from 36 package managers (npm, maven, Pypi, etc) and gathers relevant information about each of them, including their license, releases, contributors and dependencies among them. Libraries.io was started by Andrew Nesbitt and Benjamin Nickolls and it’s now part of Tidelift.

The key contribution of Libraries.io is that it goes beyond providing individual project information (something other tools provide) by offering key insights on the ecosystem surrounding that project. A software ecosystem is defined as a collection of software projects which are developed and co-evolve together (due to technical dependencies and shared developer communities) in the same environment.

As we said above, the dataset contains data on approximately 2.5 million unique software components, including 9 million tracked versions and 39 million tagged releases. It also contains data on 25 million repositories that utilize these projects in their own code, with 100 million declared dependencies upon projects. The complete dataset is approximately 5GB compressed, 25GB uncompressed. Beyond providing an open API, the full dataset has been made available as a comma-separated-value table hosted by Zenodo . The data is licensed for use under the terms of the Creative Commons Attribution, Sharealike 4.0 licence.

Data is organized in six packages. We summarize here the content of each package (see https://libraries.io/data for a full description, some data is only available for certain package managers since not all of them offer the same kind of data). The CSV export includes also aggregated summary data and a few additional fields to reduce the number of joins needed to analyze the data

A project corresponds to the definition of a package/library from one of the supported package managers. It includes data on:

A version is an immutable published version of a project. Some packages instead of an explicit version concept directly rely on tags/branches in the repo. Version data includes:

A repository in Libraries.io represents a publically accessible source code repository from either GitHub, GitLab or BitBucket.

Dependencies between projects. Dependencies belong to versions of a project since each version can show a different set of dependencies. Almost all dependencies are internal to the package manager. They are parsed from the project manifest file (a gemfile, package.json, or similar). Available data:

I believe that general availability of ecosystem data, as the one we are proposing herein, could trigger much more research in this area. Right now collecting this kind of data requires plenty of manual intensive work to interact with individual package managers .For instance we could use the data to answer research questions on software ecosystems either looking at the projects’ relationships within a given package or performing cross-package comparisons. Some possible questions would be:

Some examples of cool applications relying on this data are available in the Experiments section of their website. Or if you’re up for some scientific reading, check this paper: An Empirical Comparison of Dependency Network Evolution in Seven Software Packaging Ecosystems by Alexandre Decan, Tom Mens, Philippe Grosjean. (And if you’re also using libraries.io data in one of your projects and want to be listed here just me ping me back!).